It’s time to connect PHP to MS SQL Server. To make life simple, I decided to take my Zend Framework tutorial and get that going.

I created the database and albums table using the SQL Server Management Studio and populated with a couple of rows.

Using The SqlSrv API Reference, I started by with a simple test PHP script:

which gave me the error:

A quick google around suggested that I needed to install the SQL Server Native Client, so I did :) This worked!

It seems a little odd that the Web Platform Installer let me install PHP and MSSQL Server Express, but didn’t do the native client at the same time!

Once you have a connection, it gets easy! The code to retrieve data from the database and iterate over it is:

which gives the output: 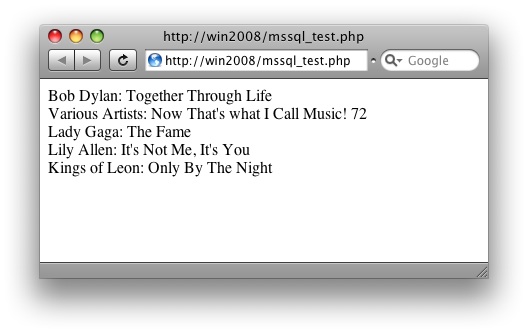 The next step is to connect and use a Zend_Db_Adapter, but there isn’t one yet. I’ve also discovered that you can’t use the SQL Server driver for PHP with PDO, so I’ll be creating an App_Db_Adapter_Sqlsrv which, assuming it works, I’ll propose for addition to Zend Framework.

This article was posted on 4 May 2009 in WinPHP Challenge

7 thoughts on “MSSQL and PHP”