Why I care about codes of conduct

I want every conference to enthusiastically champion their code of conduct in order to publicly reassure attendees (women in particular) that any issues will be dealt with. I want all of us to actually notice jokes and conduct that make conferences uncomfortable for women and call out or report issues if we see them. I’m still learning how to do this, but the rest of this post goes into detail on why I think this is subject is important. 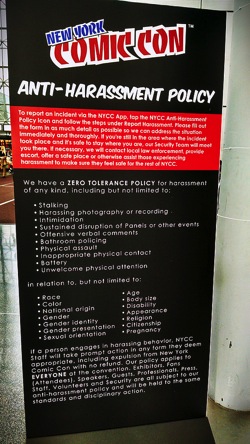 Following up on my last post about codes of conducts, I was recently asked why I’m interested in them. While I responded directly, it crosses my mind that I should probably write down my thoughts on this and then I can practice good DRY practices and just link back here!

Conferences are one of the best ways I know to become a better developer. Not only do you get exposed to new technologies and techniques via the talks, you get to meet other developers & make contacts that last beyond the event.

We know from US statistics that around 20% of all developers are women. Looking at the male to female ratios at most of the conferences that I go to, I don’t even see that many women developers there. I’m assuming that they are choosing not to attend.

So I’ve started reading. It’s hard to read without judging based on your own experiences. I’ve also talked to my wife who has gone to events in a different space and other women friends in a variety of industries and it has been eye-opening.

From my learning so far there seemed to be two main topics that kept coming up: atmosphere and safety.

One major concern I have is that a woman’s initial base assumption seems to be that she expects that something “uncomfortable” is to going happen to them over the course of an event. This runs the full range of things from physical things like being touched “by accident”, through having someone stand very close in her personal space and monopolise her to the point that she is “trapped” talking to this person to men staring at her breasts when talking to her. There’s also the words she will hear – from casual comments about women belonging in the kitchen, to overhearing jokes about how bad women are at logical thinking all the way to being asked if she has a boyfriend and if not, being propositioned.

As a man, it’s taken me ages to understand why a casual comment to a woman about whether she has a boyfriend is so damaging. It seemed harmless to me. Just a joke. However, no one ever talks to me a conference with an underlying subtext that they are mainly interested in having sex with me rather than geeking out on tech and programming. No one ever questions my authority in my subject area. Even now, I have been places where I hear conversations between one of my female friends and another man and they tell me afterwards that the man clearly didn’t think she was competent by his choice of words and demeanour and I didn’t even notice :(

Hence, I can completely understand why a woman would rather not go to a conference than have to deal with this underlying unspoken assumption that she isn’t good enough to be a programmer. Don’t even get me started on the message that’s sent when you see pictures of women in lingerie or short skirts in slide decks and sponsor advertising material. I’ve seen all these things at conferences before.

To my wife, her personal safety is very much an active thought in her mind when she meets any man. It’s her default position. Apparently this is as much of a worry in a public social setting as on a lonely street at night; maybe more so. By safety, I don’t mean violent rape. I mean being hugged when you don’t want to be; being touched “by accident”; being cornered by someone. These things don’t just happen at evening socials, they also happen in the coffee break. These things are happening in public places and and no one else in the room notices.

How are we supposed to stop things that we don’t even see from happening?

The logical thing to me is that if any woman experiences anything she is uncomfortable with (or a man sees something happening to a woman), they should feel able to report it in private and be 100% sure that they will be believed and looked after, no matter how minor the organisers may perceive this incident to be.

I don’t think I can emphasise enough that so many incidents appear to be minor and “just the way things are” to men. I’m finding this really difficult to internalise and I’m, notionally at least, aware of the issue. “Just a joke”, “That’s just how Bob is”, “That’s not against the law”, “It’s just a pat on the bottom” are all ways to enable us to believe that there’s nothing in our community that needs improving.

Coming back to the subject at hand, I think that a published code of conduct is a clear way to say to the attendees that the organisers know that these things can happen and that (a) they are publicly saying that they are unacceptable and that (b) they are signalling that they have a plan, already in place, for dealing with any incident that may happen.

I appreciate that other people don’t agree with me and think that their conference doesn’t need a code of conduct because they work towards improving diversity in other ways.

Personally, I see a code of conduct that is championed by the organisers as a great way to improve the inclusivity of an event which can only make for a better conference. I want to see them at every conference.

I was impressed to see that NYCC put their code of conduct on billboards throughout their conference! This is a commercial venture, so certainly they thought about the pros and cons of doing it.

However, the best way we can make conferences more welcoming to women is if we, the attendees, call out our fellow attendees on what they say and what they do that’s unwelcoming. It takes courage to report a joke that isn’t suitable for a professional conference, but if we all do it, it becomes the norm.

If you are interested in some further reading, on this topic then I can recommend Codes of Conduct 101 + FAQ, Sexual harassment at technical conferences: A big no-no and Your conference needs an anti-harassment policy.

For some real-world experiences, try My first OSCON, This is why we can’t have nice things, The Creepy Librarian Stalker Hypothesis & Please do not pat me on my head. There are many many more examples out there; try asking any woman who’s been to a conference as I haven’t found one yet that did not have a story to tell.

Finally, the discussions on this reddit thread and on BoingBoing about the very visible NYCC banners are interesting too.

This article was posted on 3 November 2014 in Me