Let’s say that you want to use Zend Framework 2’s Form component outside of ZF2 itself. In this case, a Slim application.

It turns out that Composer makes this quite easy, though there’s quite a lot of code involved, so this is a long article.

and of course, composer.json:

Given this starting point, we can now add Zend\Form.

I’ve also set up the RKA namespace as we’ll have to create some classes ourselves.

These are minimum set of components for it all to work. If you do your own rendering, then you don’t need zend-view or zend-escaper. You’ll then only need zend-i18n for some validators and filters.

When you run composer update, you’ll see that the following ZF2 components are installed for you:

Other than EventManger which is required by View, this doesn’t seem an unreasonable list to me.

As, we’ll probably want to override the default validation messages and add our own validators & filters, it’s worth spending the time setting up our own instance of Zend\ServiceManager and using that to instantiate the form for us.

Configuring the service manager with the relevant plugin managers is usually done by Zend\Mvc & Zend\ModuleManager, so we’ll simplify and create a single class called ServiceManagerConfigurator. This is the most complicated part of the entire thing and looks like this:

I’ve commented the code so that hopefully, it’s fairly easy to follow.

The key method is createServiceManager which will instantiate a ServiceManager object, add the plugin managers and other bits and bobs before calling the helper method applyConfig which will do the custom configuration.

To use it, we update our index.php:

We firstly set up the config that we want. In this case, I want to add my custom validators and then I add the form we want to use. Obviously, if we had custom filters, form elements or view helpers we could also add those too. Also, although I’m using invokables, you could also use factories if any of the classes you were adding had dependencies that needed adding.

The form is defined as any other Zend\Form is. In this case, I created a separate class called RKA\ExampleForm, but we could equally have used the factory creation.

Nothing complicated is going on here. We add two elements to the form and then define some validation for the email element.

To use the form, we update our handler for ‘/’:

We grab the $formElementManager from the service manager and then grab our example form form there. If the request is a POST, then we set the posted data to the form and test for validity. On success, we would probably redirect. Finally we render our view template, passing the form to it.

Finally, we have to extends Slim\View to integrate ZF2’s view helper system with it. This requires implementing the Zend\View\Renderer\RendererInterface and also writing a __call() method:

One undocumented feature of the formElement view helper is that it looks for a method called plugin in the View class, so I created one for it! 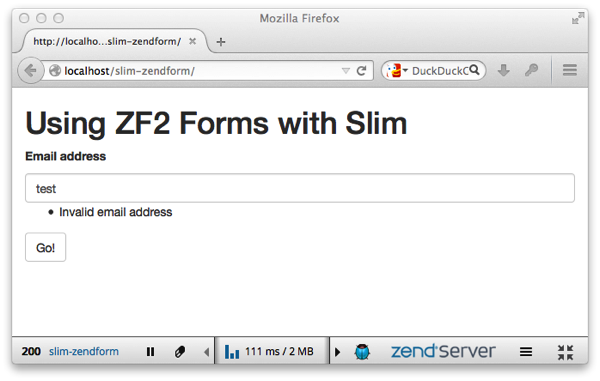 That’s it. The code that’s shown here is on GitHub in the slim-zendform project, so you can download it and play around yourself.